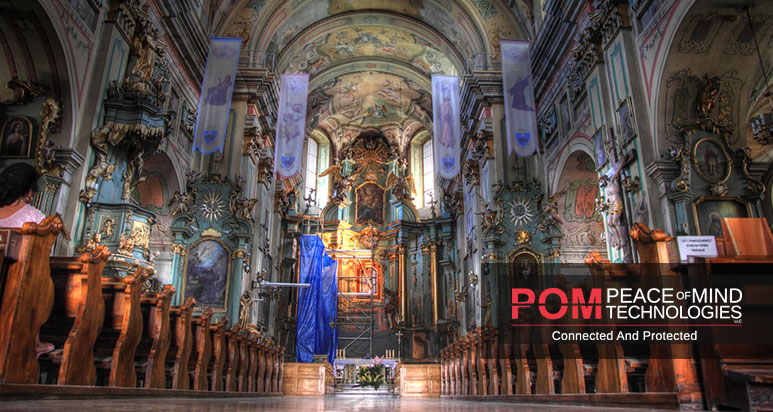 According to a 2016 report by the FBI, 6,121 hate crimes were reported that year, 21% of which were directed against people or institutions due to their religion. That’s more than 1,200 religious hate crimes in 2016 alone. FBI statistics also show that religious hate crimes seem to be on the rise; in the first 4 months of 2017, there were 541 reported anti-Semitic incidents in the US, a more than 120% increase from the first quarter of 2017. Data also shows an increase in anti-Muslim hate crimes, with a more than 25% jump in incidents between 2015 and 2016.

These numbers also may not paint the whole picture. The Southern Poverty Law Center (SPLC) cites a Department of Justice study indicating that the “the actual number of [all] hate crimes may be as high as 250,000,” around 40 times the amount that are reported each year to the FBI.

With over 1,200 religious hate crimes in the U.S. each year, security should remain a priority

In today’s environment, religious institutions need to remain vigilant to protect the communities they serve. However, doing this is often complex, since mounting an effective security strategy can be confounded by both cultural and financial concerns. Despite the challenges, security for religious institutions can be effective without being intrusive – as long as it’s done with a smart approach.

Religious institutions need to balance security with a welcoming environment

Unlike many private businesses and government institutions, some of which may not mind security measures that seem a little tough or austere, religious institutions strive to maintain a warm and welcoming environment while still keeping themselves secure. A large number of armed guards, fencing, and other typical high-security measures are usually not appropriate. A good security strategy must be effective, but it can’t end up making the premises seem like a fortress.

In addition, religious institutions often host high-traffic community events open to congregants and non-congregants alike. In many cases, these events (as well as regular services) also involve a large number of volunteers, many of whom may be elderly and may not understand or appreciate the need for heightened security measures. This all means that the best security measures for religious institutions are effective and unobtrusive; allowing the organization to continue operating as usual.

Access control and remote monitoring can help strike a balance

One of the best ways that religious institutions can improve their security strategy is to incorporate smart access control measures as well as newer technologies, like remote and intelligent video monitoring.

While the front doors of a church, mosque, or synagogue may remain unlocked during normal hours, it’s advisable to secure backroom areas with key cards issued to employees and trusted volunteers. If an emergency, such as an active shooter, happens on the premises, employees and volunteers may be able to help congregants get to a secured area.

Parking lots can also benefit from a smart access control and surveillance strategy, especially since parked vehicles could be used by individuals to stage a crime or even plant explosives. In that case, a parking vestibule with a security guard is often the best solution; but for institutions trying to manage costs, a gate with a key card system or just 24/7 surveillance monitoring can also be effective.

Remote monitoring is one of the most effective and cost-efficient security tools. Instead of hiring more onsite security personnel to watch a network of cameras, the institution can outsource this service to trained professionals in a remote monitoring center.

When any hint of suspicious activity is detected, the remote monitor can alert onsite personnel or, if the situation calls for it, directly contact law enforcement. Another option is to warn off intruders via remote speakers and/or an alarm. With recent advances in technology, remote monitoring can also use intelligent video monitoring – software that uses algorithms to detect suspicious behavior on camera. The program may pick up on something suspicious that a human misses, and either trigger an alarm or direct personnel to the surveillance feed that demands their attention.

While each religious institution has a different set of needs, all of them are looking to strengthen their community while making sure that everyone within it remains safe from harm. A smart security strategy can accomplish the latter without infringing upon a welcoming environment.

To truly succeed, most institutions need a combination of measures which may include in-person guards, effective access control, basic security infrastructure, and a good network of surveillance cameras – with an effective way to monitor them. In addition, many institutions can also benefit from a quality alarm system, automatic spotlights, and speaker warnings, which can help prevent late-night vandalism and other suspicious behaviors.

Since 2002, Peace of Mind Technologies has delivered over 2000 security solutions across six industries in the greater New York Metropolitan area. We’re specialists who work with you to provide comprehensive site-specific security from implementation to post-installation support. To discuss your needs, please call (212) 688-2767, email at info@pom-tec.com, or complete this contact form.